Every year I think of a new fun latke recipe to create! Now, nothing compares to my mom’s classic latkes (with shredded zucchini), but having fun with flavors, different vegetables and unique toppings is what the celebration is all about!

Here, I gathered a list of fun and unique latke recipes to try that go beyond just potatoes.

Which latke recipe is your favorite? 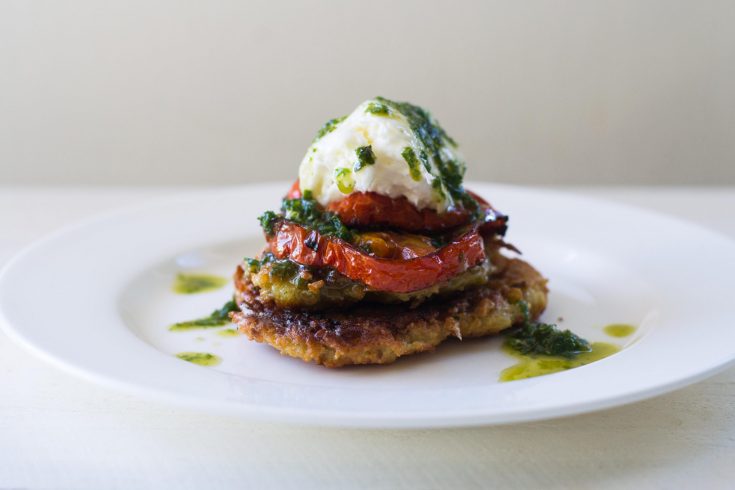 Classic latkes are mixed with sweet roasted garlic and topped with roasted tomatoes, creamy burrata cheese and basil oil for an Italian twist. 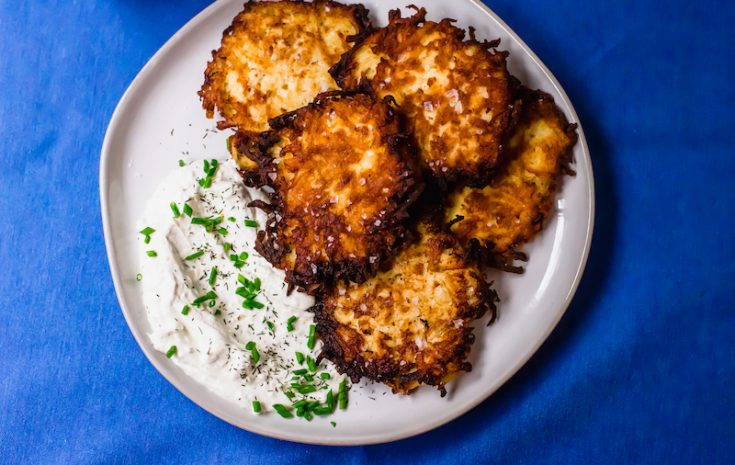 A play on the traditional potato latkes, these salt and vinegar potato latkes have a hint of sourness from the vinegar and a healthy sprinkle of sea salt. Serve along side onion and chive sour cream for a fun play on latkes. 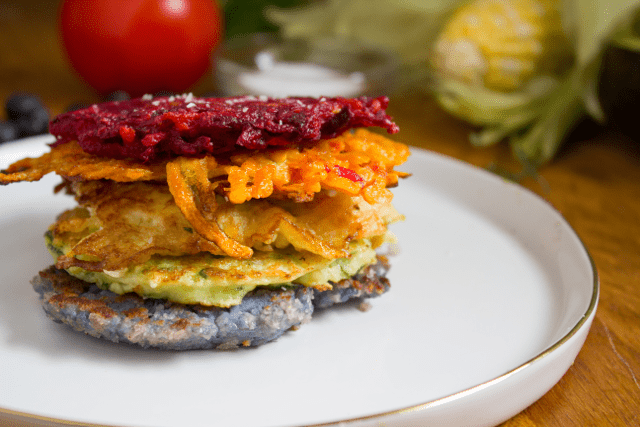 What’s better than brown potato latkes? Rainbow latkes in every color!! (Made naturally, of course!) 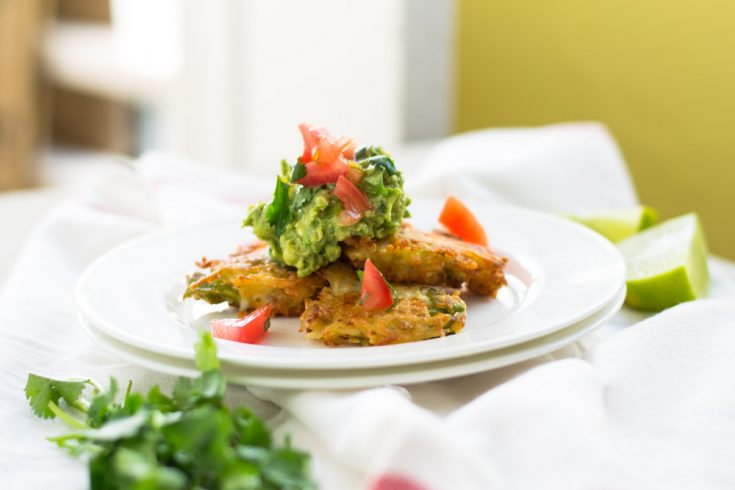 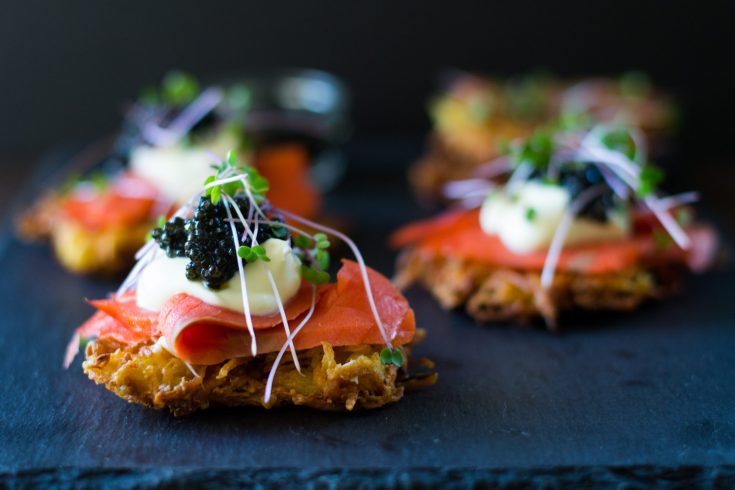 Perfect for a Hanukkah ap[petizer, parsnip latkes are topped with creme fraiche, lox and caviar. May I suggest a glass of sparkling to pair it with? 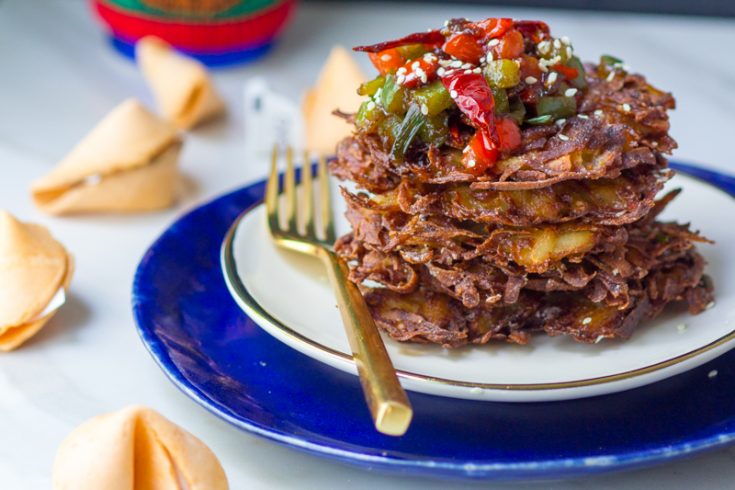 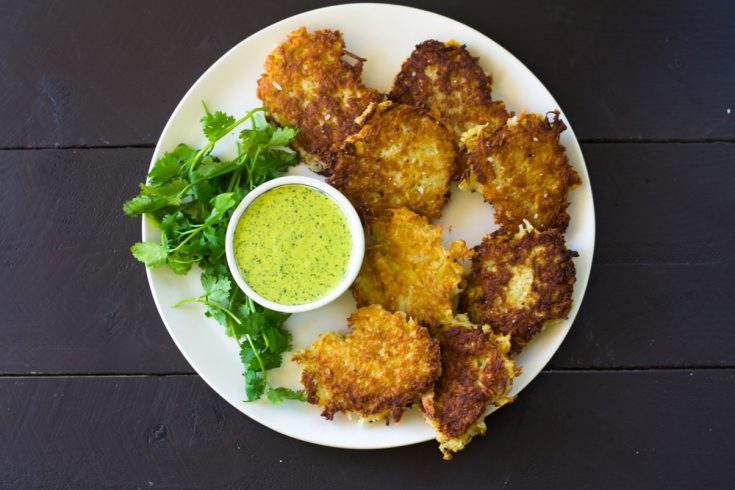 Inspired from Peruvian flavors, Yucca latkes are paired with a bright and creamy aji sauce. 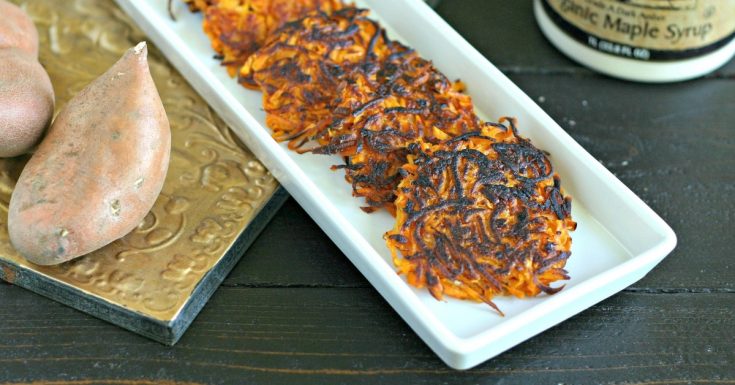 Candied Sweet Potato Latkes. A fun twist on the classic, made with maple syrup, vanilla, a bit of OJ and some coconut sugar. Gluten free and nut free! 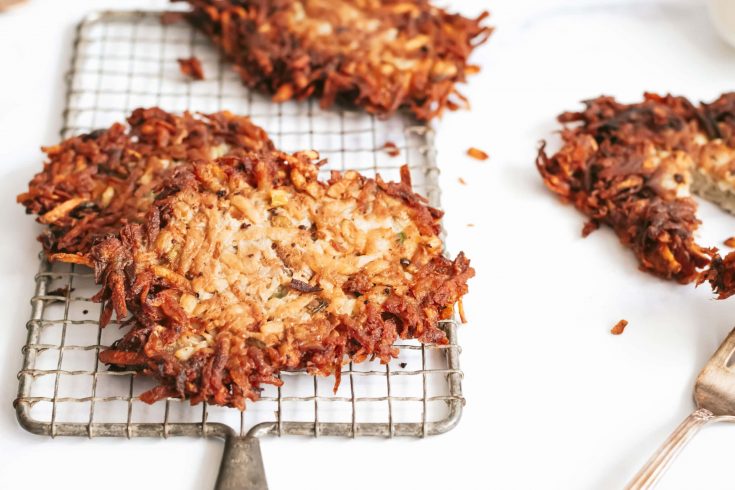 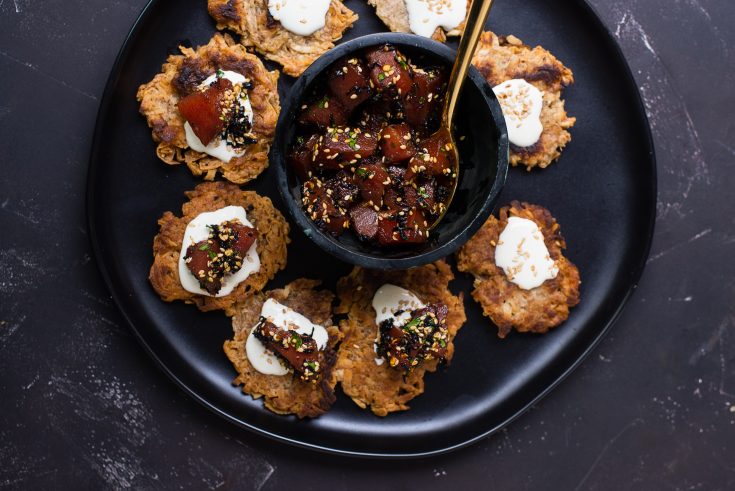 Inspired taro latkes with wasabi sour cream and poke. Not your traditional latke to say the least, but the combination of fried taro with spicy cream and poke is one not to be missed.

The beauty of this recipe is the flavor combination. The purple sweet potato latkes are a bit starchier fry up beautifully. Then roughly chopped kimchi is layered on top, saving a bit of the kimchi juice to stir into sour cream. And let me tell you…kimchi sour cream is a HUGE must do! 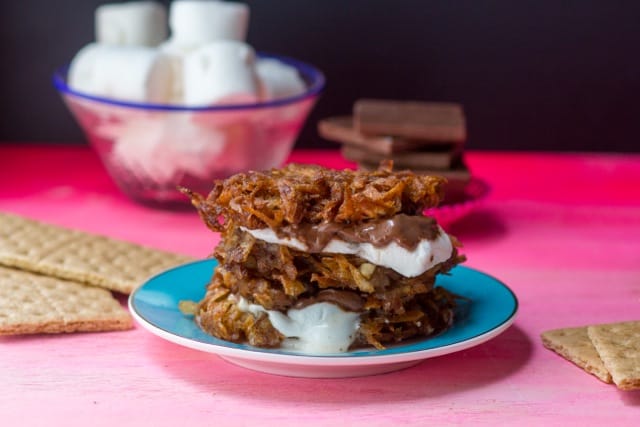 Who says latkes have to be savory? These S’mores Latkes sandwiches are rich, gooey, and flavored with cinnamon and sweet chocolate. 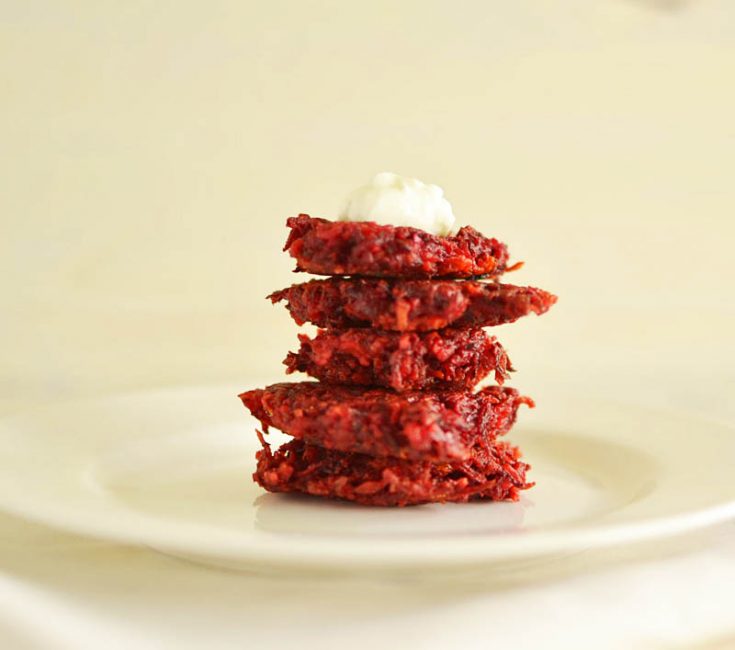 Beet latkes are seasoned with a touch of warm cumin that pair so well together. 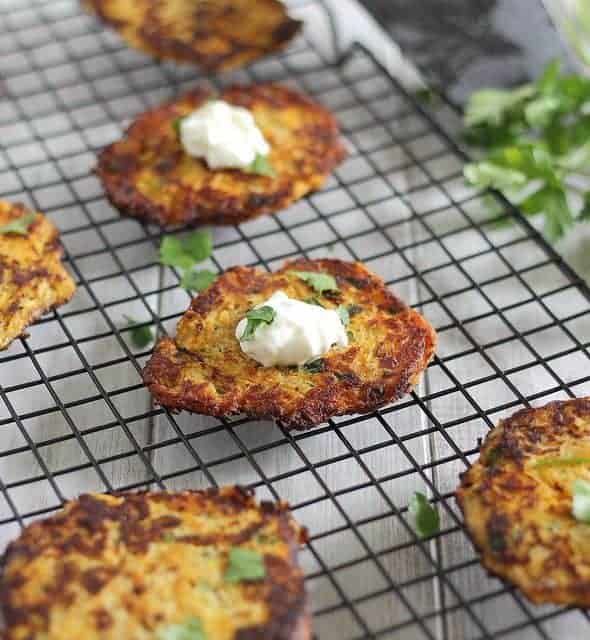 These spaghetti squash latkes are spiced up with a little jalapeño and made a bit healthier with squash instead of potatoes. 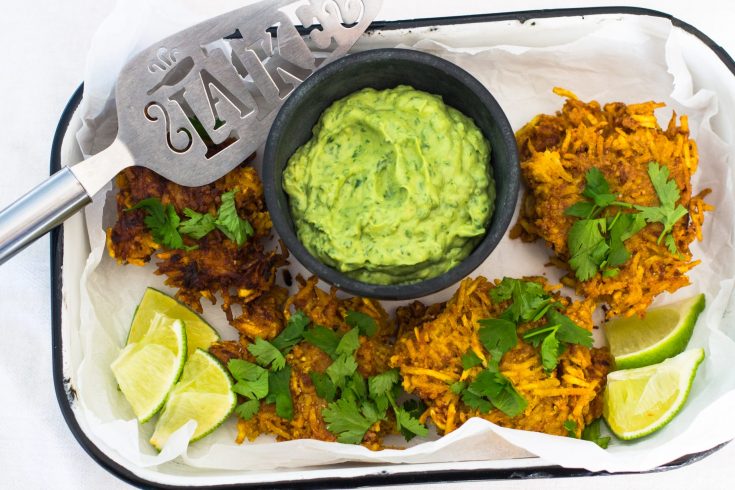 With inspiration from savory plantain chips, plantain latkes are fried up and served with a bright lime avocado crema. 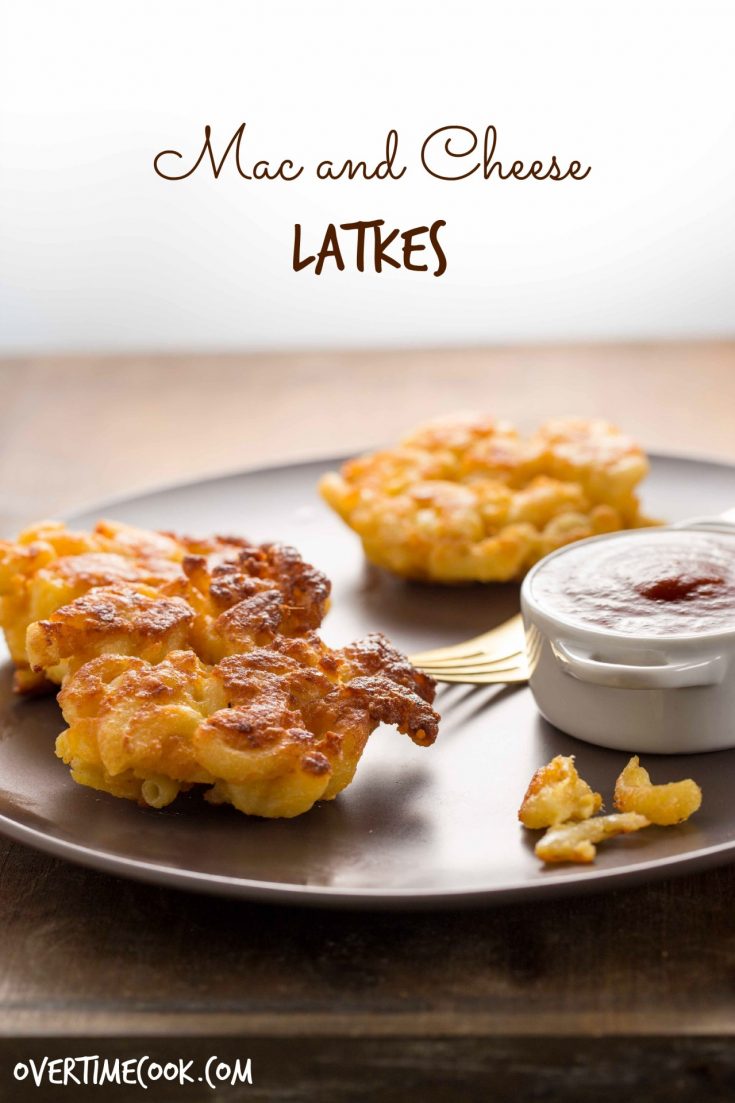 Mac and Cheese Latkes and a Chanukah Blog Party and Double Giveaway!

Mac and Cheese Latkes are crispy and golden on the outside, soft and cheesy on the inside, and perfection in every bite! 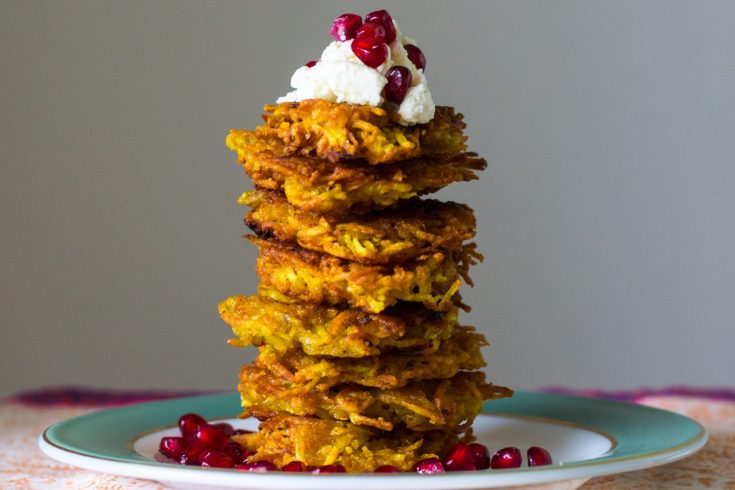 Potato latkes are flavored with floral saffron, earthy turmeric and topped with feta and pomegranate seeds for a bit of sweetness. 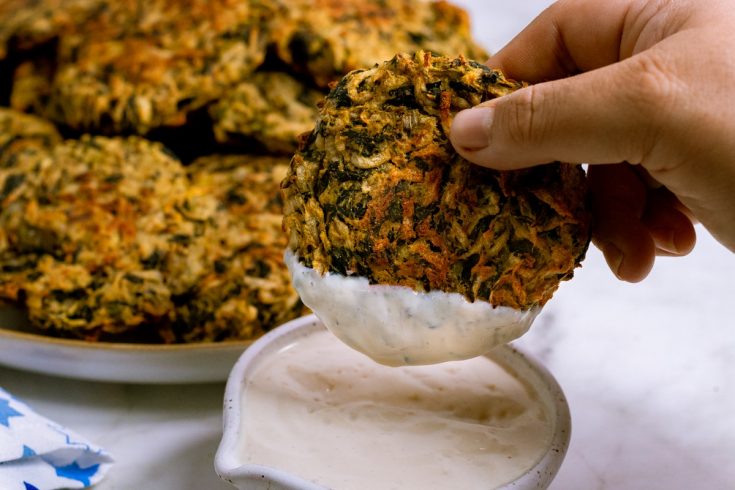 A fun twist on a classic party dip, these spinach artichoke latkes are flavorful and nutritious! A healthier baked potato pancake, these versatile latkes make a great snack, appetizer, or even a meal if you’re so inclined.