Every year I create a fun new latke recipe and this year I am blending my Jewish background with my Hawaii upbringing and sharing taro latkes with wasabi sour cream and poke. Not your traditional latke to say the least, but the combination of fried taro with spicy cream and poke is one not to be missed.

I am blending my background in latke form this year. You know how much I LOVE to create fun latke mashups every year. Do you remember my hatch chile latke with guacamole I did a  few years ago? Or one of my favorite latkes to fry, yucca latkes?

A Little Bit about Taro

I found a huge taro stump just like the ones my step dad grows back in Kona. Usually when I go to the store and see taro, it can be the small roots which are more difficult to shred into latkes for this reason.

If you’re not familiar with taro, here is what it looks like being harvested. This was a few years ago in my moms backyard and we just steamed it simply with coconut milk.

However, taro is a starchy root and when squeezed of it’s liquid (like you would do for latkes), it’s milky and thick and the shredded taro will clump together. That’s why I don’t recommend putting it through the shredder attachment of your food processor, like I normally would for latkes. 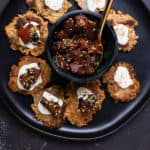 I don’t recommend using a food processor for the taro, instead use a box grater to grate taro because it is so starchy. 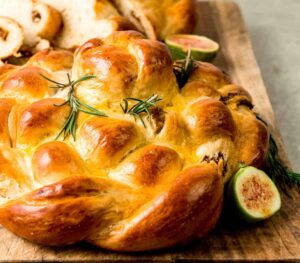