Inspired from favorite Peruvian flavors, these yucca latkes are fried to crispy perfection and served with a slightly spicy and creamy aji amarillo sauce for dipping. Yucca fries up beautifully and dare I say they are even better than potato latke?

There is a Small Population of Jews Living in Peru

Today’s excursion is with inspiration from Peru! Though I didn’t find much research in the celebratory festivities of Hanukkah in Peru, there is a small population of Jews living in Peru, mostly in Lima. Peru is predominately a Catholic country, with less and less Jews living in Peru now. According to this article, many Eastern European Jews fled to Peru during World War 1, but since many have moved away and now it’s thought that there are fewer than 3,000 Jews living in Peru.

A staple in South America, yucca is a fabulous starchy vegetable. I first had it when one of my Peruvian girlfriends introduced me to it. She simply boiled it, which I do sometimes as well and it’s delicious.

For Hanukkah, and to “blend” cultures together, I wanted to make something fried, obviously. Yucca is SO fabulous fried, hence the perfect reason to make yucca latkes! The texture stays a bit more starchy and it holds up to the spicy sauce (more on that later). 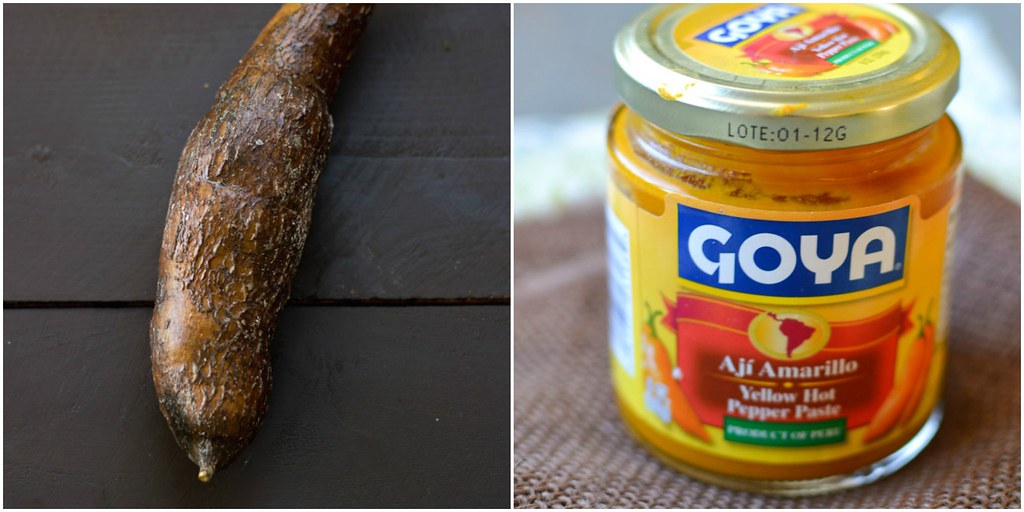 Now, let’s talk ingredients. First there’s the yucca aka cassava. It is a (usually) long root with tough, thick brown outer skin. It’s sometimes difficult to peel, so be patient and use a sharp peeler. Cut it into smaller “chunks” because if it’s too thick, it’s almost like cutting into a hard squash, it’s that difficult! Down the center of the yucca is a fibrous stem that you want to remove, usually easier after boiling or if you’re frying and use your food processor to grate, you won’t need to.

For the spicy aji amarillo sauce, I used something called “aji amarillo paste”. (photo above). I mentioned it briefly when I made my Peruvian cilantro soup. It’s a gorgeous thick yellow paste made of yellow pepper. I found it this way at a local Latin market but I’ve also seen the pepper frozen as well. A few spoonfuls goes a long way and gives you a good pucker, if you’re into that. I would find a jar and keep it in the fridge if you’re in a spicy mood. 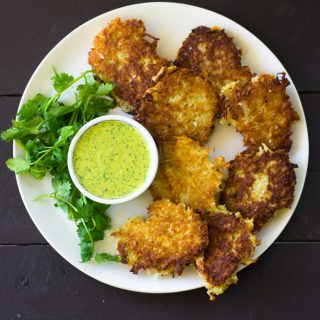 Latke inspired by The Latin Kitchen