I am sharing one of my most regretted non-eats when we visited Turkey and finally making this Lahmacun recipe AKA Turkish Pizza (or flat bread), however you want to perceive it. Topped with crisp chopped salad and creamy herb tahini sauce.

One of my greatest foodie regrets is not having lahmacun in Turkey. With so many bites and dishes in our trip, it was difficult to try everything. So since, I’ve made it a routine to remake lahmacun at home.

I hope I have done the Turks proud, as this lahmacun recipe is modernized a bit. Traditionally, you see the locals wander the streets with lahmacun rolled up tightly in hand. Just as any quick street food would be easily accessible and eaten.

A spicy meat mixture is pressed into the dough (I used pizza dough for ease) and toppings include thinly sliced raw onion, fresh herbs and a generous squeeze of lemon. To add contrast and texture, I added my favorite chopped salad and the creamiest herb tahini sauce, which I’ve been putting on absolutely everything! Seriously…make the sauce. 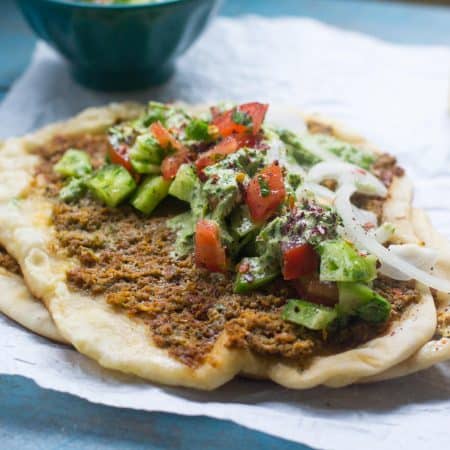