An easy vegan side dish with a Mediterranean flair, roasted kabocha squash is drizzled with pomegranate molasses, tahini and lemon zest.

I can’t believe it will almost be a year since Joe and I traveled to one of our favorite places in the world. I have always dreamt of traveling to Istanbul and walking on the same pavement my ancestors have. Ever since I was young, my mom would always talk about her grandmother from Turkey and why we eat the foods I grew up on.

There were 2 spectacular moments that I will never ever forget. The first was on the first night of our trip. We were exhausted, jet lagged and the only thing we saw was the inside of the cab and our hotel room. Then suddenly at about 3am, we were both woken by the pitter patter of rain drops over the city. We opened the window for fresh air and were instantly greeted with the call to prayer. It was chilling and beautiful. I believe it was the first call to prayer of the day, right before sunrise. We will never forget that.

Woke up to a rainy 5am call to prayer. #istanbul

The 2nd spectacular moment was lavishing over a true Turkish breakfast. One of the other reasons we chose to travel to Istanbul was right after we watched Anthony Bourdain’s show, No Reservations. Joe and I were both in awe of the City, the food and especially the Turkish breakfast. So of course, Joe remembered the restaurant where Bourdain went and we went on our merry way. In true language barrier fashion, we managed to tell the cab driver the restaurant, called Kale but pronounced Ka-LAY (if I remember correctly) and 20minutes later we were ready to feast on the best breakfast of our entire lives.

Kale sits directly across from the gorgeous water way and the ocean views are just spectacular.  I know nothing will ever compare to the initial experience of being served fresh pomegranate-orange juice and clotted cream with local honey of that morning. The Turkish sausage and eggs were addicting, warming and savory, it was truly the perfect moment.

We have been dreaming of re-creating the Turkish breakfast when we got home to the States and it only took..oh..about 9 months, but we finally did it!. Turkish breakfast is like no other..and I am so excited to walk through each element that we enjoyed.

This is one of the most common breakfast dishes, next to Menemen (which I will share soon). Basically it is spicy beef sausage called Sucuk with spices that taste like cumin and perhaps cayenne. The sausage is sliced and cooked with over easy eggs and then topped with cheese, we chose a mild feta.

I have heard this is also called “Turkish crack” and I can see why. Smooth, velvety, luxurious clotted cream sits in thick sweet honey. You won’t be able to stop slathering thick pieces of fresh bread through this..because we didn’t. If you ever had clotted cream on hand for a reason, please…let it be this!

This was my personal touch. It is not surprise that I love, love borek! Flaky pastry with any filling of your choice!  We did enjoy cheese borek at breakfast quite a few times, but eggplant sounded so luscious, I couldn’t pass it up. (Recipe at the bottom of this post). 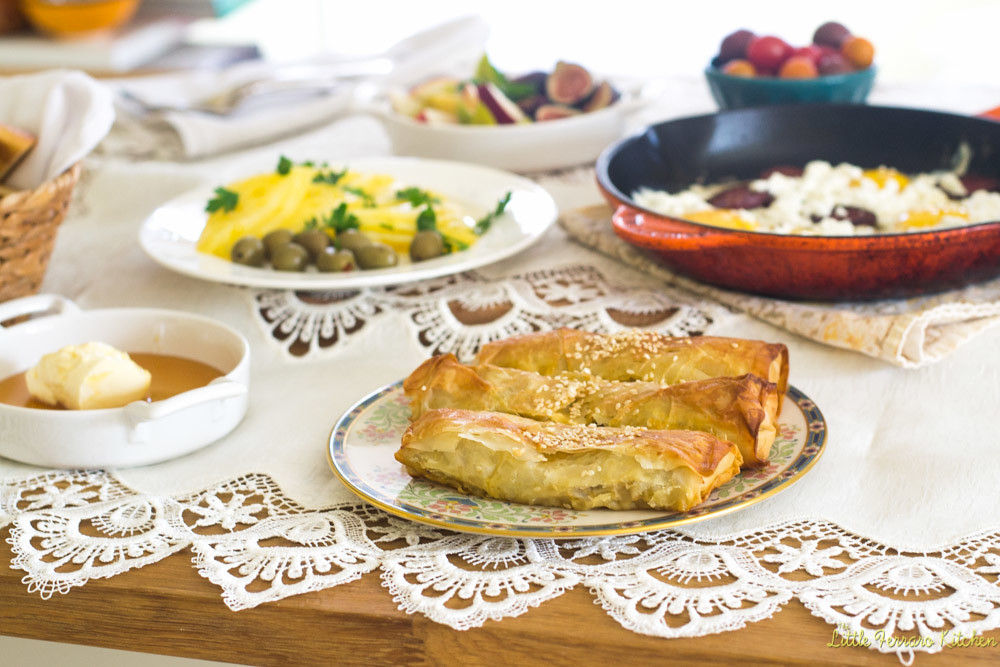 Thank you Istanbul for treating us to a true feast for the palette! We will never forget the view, the experience and the hospitality! Turkish food, people (and the breakfast) has a very special place in our hearts (and our appetites). 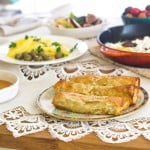