Lahmacun is one of my favorite Turkish recipes. Usually made with meat, this vegan recipe showcases all of the same bold Mediterranean flavors but made with a hearty vegetable mixture, tangy pomegranate molasses and warm spices. Top the vegan Turkish pizza with sumac onions, lemon and fresh herbs for a fresh pop of flavor.

There are a few varieties of Turkish pizza, such as the more traditional lahmacun that is topped with meat or the long boat shaped style called pide, another of of my favs!

Think of lahmacun as a very thin crust pizza. They are sold all over Istanbul and are great for weeknight cooking. I made this even easier with the help of store bought pizza dough, just be sure to roll it as thin as you can.

Traditionally, you’ll see lahmacun pressed with a spiced meat mixture and then baked. Instead, I took this version and veganized it with robust mushrooms, peppers and tomatoes and included bold Turkish flavors such as paprika, pomegranate molasses and cumin.

Cook the vegetable mixture and once the dough is rolled out thin, press the mixture onto the dough. If you have a pizza stone, get that nice and hot in the oven and cook the lahmacun right on that. Then once done, top with sumac onions, fresh lemon juice and lots of fresh herbs. 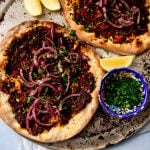 If you don’t have a pizza stone, you can also bake these on a baking sheet. Just line with parchment paper and pizzas and bake for 8-10 minutes until the crust is lightly golden brown and cooked through.

Is there anything better than fried cheese? May I

Is there anything better then perfectly crispy fal

I could eat these all day long! Simply fried plan

A classic to say the least, linguini and clams is

A Turkish staple, spinach and feta borek are delic