And this is the amazing package that Hatch Chiles.com sent over! Addicting! A 2.5lb bag of chopped roasted chiles and another 2.5lb bag of whole roasted chiles. Half of the chopped bag is already devoured in every breakfast egg dish we have had over the last week. Addicting..I’m telling you!

So..hatch chile latkes. We don’t always have to wait until December to enjoy these fried potato patties. I went with a Southwest flair and added chopped hatch chiles and shredded cheddar cheese to my mom’s famous latkes. They fried up perfectly and each bite offered gooey cheese all throughout the latkes. To counter the spicy bite, I also made a quick hatch chile guacamole and garnished with fresh tomatoes and a healthy squeeze of lime. Spicy, cheesy, savory, creamy and fresh in every bite!

I still have plans for the rest of those hatch chiles. I’m thinking breakfast burritos, veggie burgers and lots of scrambled eggs!

Have you had hatch chiles and what do you add them to? 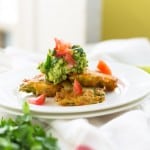