Slightly sweet parsnip latkes are made mini sized, which are perfect for a single bite or an appetizer. Then parsnip latkes are topped with some fantastic toppings, a dollop of creme fraiche, lox and caviar. May I suggest a glass of bubbly to pair with?

This was originally made a few years ago when Hanukkah happened to fall on New Years Eve. But because these are some of my favorite toppings to put on latkes, I make them every year as an appetizer to start the Hanukkah celebrations.

Another fun project, would be to make your own homemade lox top top the latkes with. 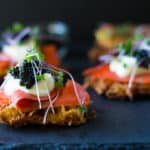