Let the Ferraro latke factory commence! 1 latke recipe down and 2 more to go and these saffron latke with herbed feta are next on the list!

These saffron latkes were on the agenda last week for a fun table spread I made for my newest head shots! It was so much fun and I met some awesome local women entrepreneurs who made me feel and look beautiful and took pretty pictures of my tasty eats! Thanks to Elizabeth Marie Makeup for doing my makeup and making me feel absolutely glamorous and Katheryn Moran Photography for these gorgeous photos and understanding my love of pretty eats.

The inspiration for our food shoot was Mediterranean, but of course I had visions of holding up mile high pile of latkes. So with the Mediterranean theme in mind, I made a Sephardi twist with saffron, turmeric latkes and topped with marinated feta and gorgeous jeweled pomegranate seeds.

How gorgeous is that plate of saffron latkes?? I can’t take credit for this beautiful photo, but so thrilled that Katy captured exactly what I was envisioning! Fun, bold, colorful and temping bites…yes!

And get your oil hot and save room for more crispy goodness…2 more latkes recipes will make it your way before the holiday hits! 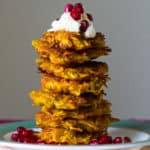