What better way to celebrate Hanukkah, then with a colorful and fun latke bar with all sorts of toppings to choose from! Some favorites are brisket topped latkes with romesco sauce and latkes topped with creme fraiche, lox and caviar. Have fun mixing and matching all of the latke toppings, but the real question is, what would you top your latke with?

Hanukkah is one of my favorite holidays to cook for! I have so much fun creating a different type of latke with different vegetables and toppings every year. Some of my favorites might be these hatch chile and cheddar latkes and purple sweet potato latkes with kimchi, which are a fun twist to the traditional potato latkes.

A few years ago I hosted a latke party and made a full on latke bar with all the toppings! It was so much fun! I used my mom’s crispy potato latkes recipe as a base and had all sorts of toppings to chose from, such as creme fraiche or sour cream, lox, different salts such as truffle salt and had guests build their own latke!

Hot Tip: I took advantage of my grocery stores hot bar and salad bar to help with some of the toppings and make the prepping even easier.

The possibilities are endless, but here are some of my favorite latke toppings for inspiration.

How to Set Up a Latke Bar

One of the reasons I love having a latke party so much, is because its colorful, fun and customizable. 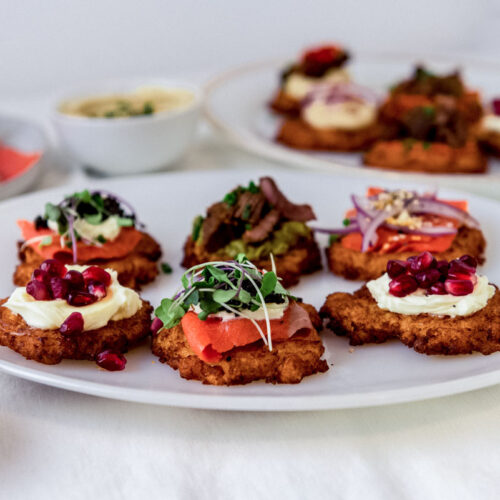 Latke mixture yields about 10-12 latkes, depending on the size, make them smaller to yield more.  When frying, look for the crispy edges, then flip over.  Cooked latkes can be made ahead and re-heated in the oven until warmed through. Don’t add toppings until you are ready to serve, as some of the toppings can make the latkes soggy.  To make latkes gluten free, substitute potato starch or gluten free flour blend for the all purpose flour.

More recipes you may enjoy