Coming right from my cookbook, The Weeknight Mediterranean Kitchen, is one of my favorite tomato recipes from the book, heirloom tomato bruschetta

This is an easy recipe, made in nearly 10 minutes with a bit of a Middle Eastern twist compared to it’s Italian version.

Toasted crostini is spread with a generous layer of tangy labneh cheese and then topped with the fresh tomato mixture.

The combination of juicy tomatoes, fruity olive oil and tangy labneh cheese is out of this world!

Labneh cheese is a strained yogurt cheese that is very popular in Mediterranean cuisine. It is one of my favorite ingredients and I use it in both sweet and savory recipes, such as beet chips with labneh and charred peaches with honey labneh.

Labneh is harder to find in traditional grocery stores and most often found in specialty Mediterranean stores. 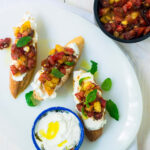 Tomato mixture can be made up to a day in advance. If making ahead, do not salt tomatoes until before serving.  For best tasting tomatoes, store fresh tomatoes on the counter at room temperature.  A good substitute for labneh cheese is thick full-fat greek yogurt.