Sweet dried figs, cinnamon and honey cook down together and are spread onto strands of round fig challah. Once baked and cut unto, the dried fruit mixture peeks out into beautiful swirls. This would also make a fantastic challah for French toast!

There are a few symbolic foods that we eat during Rosh Hashanah, the Jewish New Year. Most common are apples and honey and round challah, and many bake a stuffed apple challah to combine the two.

Other traditional items are sweet fruits, such as dried figs and dates, which I also love incorporating into a savory braised chicken with dates and saffron that is out of this world!

Dried figs are simmered with cinnamon, rosemary and honey until incredibly soft. The mixture is blended and made into a paste then stuffed into challah strands before being braided.

When you cut into the challah, swirls of the dried fig mixture peek out and I have to say that this would be a fantastic challah to make challah french toast with.

How to Make Fig Stuffed Challah 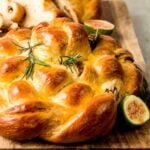