With my abundance of summers kale and chard, I have been dreaming of ways to use these hearty greens. A little while ago, I sauteed them in a glorious Orecchiette with Swiss chard, parmesan and fresh lemon and have been known to throw a handful into kale falafel  for an added greens boost.

This time I took help from store bought phyllo and made savory round borek that I filled with wilted greens, sauteed shallots and a healthy amount of cheese, resulting in a delicious savory pastry.

I will never turn down a borek. My version of this Turkish borek recipe, usually in savory form are often filled with some sort of wilted green, be it spinach, such as in my spinach and feta borek and some sort of savory ooey gooey cheese concoction.

I have also stuffed Turkish borek with eggplant served alongside a Turkish breakfast and when I have a sweet tooth, have used puff pastry in lieu of phyllo and made a blueberry apple borek with sweet tahini glaze. A total winner!

A Few Tips on Making Round Borek

I love working with phyllo and if you can even find yufka, grab that! Yufka is slightly thicker and even more pliable and I believe much easier to work with.

However, if phyllo is all you can find, don’t fret. I always say be confident and deliberate. Phyllo can dry out quickly so keep it damp with a towel on top and don’t leave it out too long.

Another tip is to not overfull with your filling so it doesn’t rip the phyllo sheets. Though, if there is a little tear, that is totally OK since it will just allow the delicious gooey cheese to ooze out a bit easier.

Still have kale and chard?

Add them to this easy kale egg and feta toast or make a one pot dinner and have chicken thighs with white beans and wilted greens. 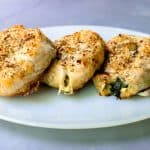 Round Borek with Cheese and Wilted Greens