This was originally a play on a deconstructed baba ghanoush, where I took some of baba’s famous flavors of eggplant and lemon and broke them up a bit. What was created was a fantastic Mediterranean roasted eggplant recipe that is hearty enough to be a main dish on its own. The roasted eggplant halves are flavored with warm spices of cumin and topped with crispy chickpeas, creamy tahini and sweet roasted beets. I also like to add thinly sliced lemon to caramelize with the eggplant.

I took inspiration from baba ghanoush to create this “deconstructed” version. The combination of smoky roasted eggplant with creamy tahini and sweet beets is magical and hearty enough to stand alone as a main course. There are so many bold Mediterranean flavors here and I suggest you play around with some of your favorite Middle Eastern flavors, such as adding a sprinkle of bright sumac, pomegranate seeds or even a drizzle of pomegranate molasses would be fantastic!

This is really a simple dish to make but does require a tad bit of prep work where most of the ingredients roast at the time.

If your eggplant is very thick, cut it lengthwise into quarters, but if yours is thinner, just cut it in half. Other toppings include roasted chickpeas that are roasted at the same temperature, half way through cooking the eggplant. And while the eggplant and chickpeas are cooking, that is a good time to make the tahini sauce and chop parsley.

Roasted Beets: If you have large beets, cut in half and wrap in foil, then roast at 400 degrees Fahrenheit until you can easily piecere with a knife. Then peel and chop into cubes for your eggplant topping. 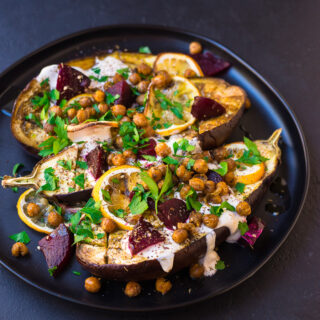 I like to make a double batch of tahini sauce and keep it for other uses such as roasted vegetables and salad dressings.  Have fun customizing the toppings: such as topping with sumac, cherry tomatoes and toasted pine nuts.

This post was originally published in March, 2014 and updated in May 2021 with nutritional information and clearer instructions.