A fall spin on traditional latkes, these butternut squash latkes are seasoned with warm cinnamon and cumin and served with a chunky apple beet salsa.

Butternut squash latkes are sweet and deep with a touch of cumin and cinnamon. I paired this fried treat with a chunky apple and beet salsa. I was thinking about roasting the apples with the beets but though a fresh bite would pair nicely with the warm latkes.

A Few Tips on Making Latkes

Every year, I make a new twist on latkes with all sorts of flavors and toppings. Here are a few of my favorites. 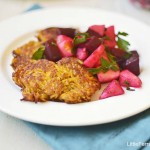 To reheat fried latkes, place on a wire rack and bake in the oven at 350 degrees Fahrenheit until warmed and crisp, about 10-15 minutes.