Inspired by the savory Lebanese Meat Pies called sfeeha, these open faced pies are topped with spiced lamb or beef and garnished with bright lemon and fresh herbs.

I used the same dough recipe as I did with Turkish pide. The dough is a dream to work with and once the ground lamb is browned with aromatics, including onions, garlic and tomatoes, the mixture is topped onto the dough and everything is baked until just golden brown.

What to serve with Sfeeha

I would probably have to take note from my trusted Lebanese friends on what is traditionally served, but I can tell you that savory meat pies are fantastic part of any mezze.

You can serve sfeeha alongside Israeli chopped salad or my summer version of Summer Fasuyle, which is a Turkish dish of sauteed green beans and tomatoes and herbs.

If you have a jar of tahini, and I urge you to always keep that on hand, drizzle some tahini sauce over the lamb pies!

Other Mixtures and Shapes for Sfeeha

I had fun with making different mixtures and shapes and the ones pictured above are stuffed with spinach and feta.

Instead of making them into flat pizza shapes, bring the edges of the dough together, making a purse shape. 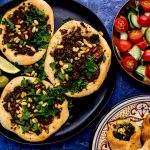 If you don’t like ground lamb, substitute with ground beef or a mixture of the two. For a vegetarian version, mix together cooked spinach with feta and lemon juice. Have extra flour on hand when rolling the dough. It can be a tad sticky.