It isn’t summer until you grill up this grilled panzanella salad! Sweet charred peppers and grilled onions are tossed with toasted ciabatta, sweet cherry tomatoes and the most delicious slightly sweet and tangy vinaigrette. You’ll never want to make panzanella any other way!

During the summer months, I am all about the big salads, or as I like to call it, “no more wimpy salads”. Julia Child’s Salad Nicoise is a perfect example of that, hearty and full of texture and color.

But this grilled panzanella salad is even easier and is on a constant summer dinner rotation. Between the sweet fresh tomatoes sand the charred peppers and onions, there is nothing better. I mean, look at those stunning colors!

Classic panzanella is a rustic Italian salad made with cubes of stale bread that is tossed with juicy tomatoes and other vegetables and drizzled with olive oil.

The moisture from the tomatoes and vegetables gently softens the stale bread, yet still keeping it’s texture. Use a variety of colorful in season vegetables, such as cucumbers, heirloom or cherry tomatoes and bell peppers.

Panzanella is one of those rustic and easy recipes where you don’t really need a recipe or exact measurements. As long as you have stale bread or grilled bread, tear it into pieces and toss with your favorite in season vegetables. Add a drizzle of olive oil or vinaigrette and you’re golden!

Grilled Panzanella Salad: A Twist on the Classic

Instead of using stale bread (though, if you have any, this is the perfect recipe to use it in), grill the bread to both dry it out and offer another layer of smoky flavor.

Either way, the bread has to be dry so it’s able to soak up the vegetable juices and vinaigrette. If you use fresh bread, it may be too soft and make for a soggy texture.

Here are a Few More Hearty Salads to Try: 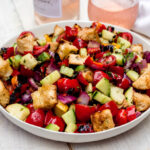 This recipe was originally published July, 2012 and updated June, 2022 with a retested recipe, updated photos, and nutritional information.