Savory hamantaaschen with six different ‘around the world’ fillings, including a pizza hamantaschen, everything bagel hamantaschen and so much more!

For Purim, many of us make the traditional sweet Hamantaschen, think of it as a triangle shaped thumbprint cookie. But really, anything triangle shaped, which represents the hat that Haman wore.

But what Purim is really meant for…the party! And what better way then making your own hamantaschen bar at home with all sorts of fun filling ideas.

Mexican (Inspired) Hamantaschen:  Refried beans and cheddar cheese and after baking, top with guacamole and salsa.

Have Fun with the Fillings

This is the time to use all those random leftovers that you have, such as roasted vegetables or random spices you’ve been meaning to use.

You can even make a hamantaschen bar with sweet fillings, such as different jams or chocolates, sprinkles and fruits. 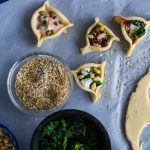 Filling measurements are not exact, depending on how many hamantaschen you’ll be making.  Be sure to pinch the dough very well to prevent seams opening.  Don’t overfill, which can cause the filling to pour out.

This post was originally written for The Nosher in March, 2017 and has since been updated February, 2021 with tips, clearer instructions and nutritional info.