A flavorful weeknight chicken tagine recipe made in nearly 30 minutes. With just a handful of bold spices, salty preserved lemons and buttery olives.

There is nothing I love more then a simple roast chicken but we are always finding ways to make the flavors pop.

Chicken tagine has some serious bold flavors and you don’t need a traditional tagine pot to create something fantastic. I took inspiration from Moroccan flavors of turmeric and cinnamon and made a colorful spice rub for the chicken.

Once seared, the spiced chicken is settled on top of sliced onions and carrots and simmered with preserved lemons, olives and apricots.

Preserved Lemons: Homemade preserved lemons are used in this recipe which may be less salty than store bought. Either way, taste a piece to know how salty your lemons are.

Olives: Buttery castelveltrano olives are used in this recipe for their mildness, though other olive options would be green manzanilla olives and/or kalamata olives.

Dried Apricots: Or other dried fruit that has a bit of tartness.

Side Dishes to go with Chicken Tagine

Here is another wonderful chicken recipe: 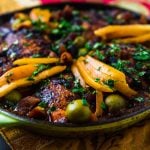 This recipe uses both the pump and peel of the preserved lemon, however if your lemons are store bought, which are usually saltier, you may want to use half the amount