A fall spin on the traditional latkes, these crispy and slightly sweet latkes are made with pear and sweet potato and flavored with brown sugar, cinnamon and a touch of nutmeg. Think of your favorite fall dessert, but in latke form!

Pear Latkes with a Fall Twist

Every Hanukkah season, I always think of a new twist from the traditional potato latkes. Name a vegetable or fruit, I’ve done it! Everything from parsnip latkes to beet latkes to yucca latkes.

But this is the first year I took a sweet fruit and turned them into sweet latkes. Pear and sweet potato make up the latkes and are flavored with fall spices of cinnamon, nutmeg and brown sugar for a candy like touch.

As the latkes fry, the brown sugar caramelizes, creating a slightly chewy texture and can be enjoyed as part of a latke spread or as a dessert latke.

What Type of Pear to use for Pear Latkes

Whenever there us fruit in a cooked recipe, I always recommend using firmer fruits so they can cold up in cooking. For the pear latkes, I used Starkrimson pears, which are both beautiful to look at, but also sweet and floral.

If you can’t find Starkrimson pears, Comice pears would be a good substitute for their sweetness. Just be sure to pick firm pears that are not too soft. 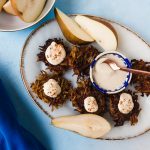 Use firmer pears that are not too soft and without any bruising. Squeeze out most of the shredded pear and sweet potatoes, which will provide a crispier latke. Use a high heat cooking oil, such as vegetable or grapeseed oil. Latkes are best eaten fresh, but can be reheated. Place latkes on wire lined baking sheet and in a 400 degree Fahrenheit oven until crisped and warmed through.

Is there anything better than fried cheese? May I

Is there anything better then perfectly crispy fal

I could eat these all day long! Simply fried plan

A classic to say the least, linguini and clams is

A Turkish staple, spinach and feta borek are delic