It’s rare that I get a cookbook and am instantly so incredibly inspired by it, I can’t wait to make something. Masala and Meatballs is just that. A gorgeous compilation of accessible Indian dishes made easy  and approachable for the standard American.

Asha is the author and blogger at Food Fashion Party and her new cookbook is loaded stunning photos and recipes and I was finding myself “dog-earing” almost every single recipe.  Spinach fritters, spiced eggplant bruschetta and almond curry are just a few things on my “I can’t wait to make this” list.

I finally settled on a play off of Asha’s naan pizzas. She has a recipe for both homemade naan (wow..easier than I thought) and another to use them for easy to make pizzas.

Mostly vegetarian recipes in the book, the naan pizza was made with chicken and for some reason I was craving vegetables. I substitute cubed butternut squash for the chicken, using all the same spices and topped the naan pizzas with Indian spiced butternut squash, extra garlicky tomato sauce and lots of mozzarella cheese and more fresh aromatics.

The flavors were incredible, blending cultures and still respecting the robust spices and Indian flavors. The homemade naan is incredibly easy to make, though took a bit longer than I thought it would. That could be user error though. No yeast is involved, just a bowl and a sturdy wooden spoon. It makes a good amount of dough, and when cooking each naan on a single cast iron skillet, that what was the time consuming part. Next time I make this, I’ll save it for summer and grill it outside! 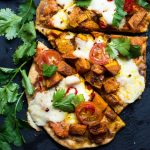